It has been thirteen years since the release of vanilla WoW, which garnered massive acclaim and praise from the gaming world. Now we’re sitting on eight expansions for this legendary MMORPG. It’s been quite the ride, from one world-ending calamity to the next. But what did WoW: BfA bring to the table for us? This World of Warcraft review of BfA will tell you exactly that.

Before you make any assumptions, we will not be discussing BfA’s main narrative in its entirety. Rather, we will simply lay out the starting pieces of the board.

For those of you who need a refresher on how Legion’s story concluded, here’s the crescendo. Sargeras, the dark titan, managed to cleave the world of Azeroth, causing it wounds so grievous as to draw blood from the planet itself. This crystalline life-force, called Azerite, began pouring out from the earth in massive quantities.

After the fact, both the Horde and Alliance saw the potential power of this Azerite, and, in lieu of a common foe, swiftly returned to their old routine of endless struggle against one another. To break the everlasting stalemate, both factions scramble far and wide to forge new alliances.

The Alliance endeavors to reach out to the seafaring nation of Kul Tiras, repairing their damaged relations all the while. The Horde, on the other hand, attempts to brave the long-forgotten continent of Zandalar to find its native Zandalari empire, where blood trolls reign.

These two empires and their territories act as the expansion’s new maps and leveling grounds.

The New Areas: Design and Quests

The two new islands, Zandalar and Kul Tiras, may be some of the finest work Blizzard has ever done with WoW. They’re both expansive and packed with engaging questlines for both of the opposing factions.

Zandalar, the Horde’s area, the forgotten southern continent, is a sprawling territory covered in verdant jungle thickets. It’s the realm of the Zandalari trolls, as regal as they are ferocious. The visual design of this area is beautifully haunting, with dark tombs, lush greenery, and a scarlet moon looming overhead. With stories of an ancient blood-god the local trolls are trying to release from captivity, its red glow seems like an appropriate forewarning.

As we’ve already seen with every release, WoW expansions provide far more than the word “expansion” implies, with perhaps thousands of hours of gameplay. BfA is no different in that regard, and it is positively brimming with fresh content.

The world quests alternate between ridiculous and forlorn, and they ride that fine line excellently. And, for the dungeon fans, two Mythic+ dungeons containing formidable bosses, will offer momentous raids. The main quest also contains some touching moments, especially regarding Jaina Proudmoore’s relationship with her mother.

While BfA shines from a story and setting perspective, there do exist some undeniable problems on the leveling and loot front.

Namely, the expansion adds the Heart of Azeroth, a new amulet item. This necklace can bestow upon the player’s gear new abilities and strength by absorbing Azerite. When it takes in enough of the stuff, you may add stats to your Azerite Armor. Each piece of this armor contains three rings, which are three buff spaces.

That’s all well and good, reminiscent of Artifact Weapons from the previous expansion. But the stats this amulet offers are, frankly, uninspired. You’ll find yourself choosing between only two different power-ups, and neither will exactly have you jumping out your boots. They’re little more than stat improvements, temporary shields, or something to that effect.

The leveling experience isn’t quite as rewarding as we would hope, either. The level cap has upped from level 110 to level 120, which is nice. But the quests, as varied and lovingly-crafted as they are, provide somewhat mild rewards experience-wise. There are no new talents or abilities, so there’s actually not much reason to level up to 120.

WoW is a titanic game with millions of devoted players exploring its worlds for over a decade now. Blizzard has fine-tuned its WoW business model to cater to long-time players since they’ve been their most loyal (and profitable) customers. 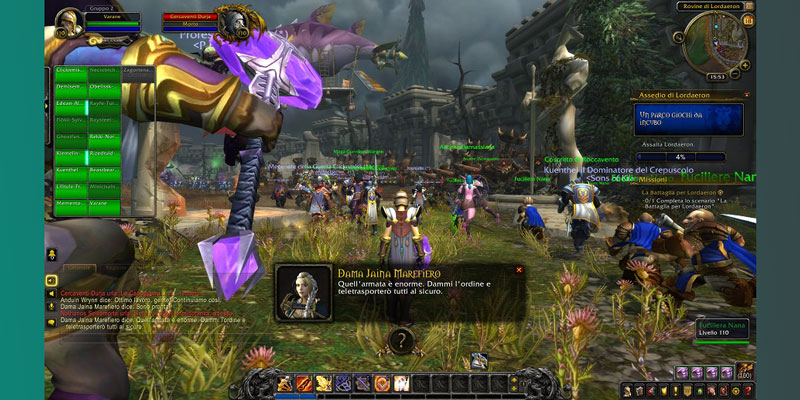 Thus, in recent years, they’ve somewhat neglected the player base that’s just starting out with the game. A sizeable chunk of the game’s content remains outdated, making it kind of a mess. Meanwhile, leveling up is laughably easy at the start, as you’ll rarely feel challenged at all. You’ll rake up levels so effortlessly that it reaches the point of tedium.

Experienced players, on the other hand, will likely have much more fun with their playthroughs. BfA even has a token that will instantly skyrocket you to level 110, so, if you already have a specific build in mind, you can skip the formalities of the grind. New players could theoretically use this token to avoid the lackluster early-game content, but they would probably find all of that stat-skill-spell choosing at once more than a little overwhelming. They could make use of a comprehensive guide to make their lives easier, though.

In respect to PvP, the way it functions has been revamped from the ground up. BfA sports the so-called War Mode, wherein you simply teleport to a zone with plenty of people who have also turned on the mode. This could prove massively entertaining or endlessly frustrating, depending on the situation.

One the one hand, it’s convenient, and it doesn’t really get in the way of your quest-solving. On the other, you’re always open to ambushes, rather than conducting previously-arranged fair battles. It almost has a tinge of that Dark Souls invasion system and the love-have that comes with it.

All factors considered, World of Warcraft’s latest expansion, Battle for Azeroth, is a terrific addition to the MMORPG’s repertoire. Its enthralling quests and island expeditions will have players tearing away at the content long after they’ve reached their level cap. While the new items won’t rock your world, they still present a refreshing addition to the game. It opens up exciting, breathtaking new lands to explore, and furthers the Warcraft tale appropriately. What more could one ask for?