The Final Frontier is a tumultuous, yet inspiring place, as Stellaris, a 4x game from Paradox Interactive, will prove to you.

Stellaris is an expansive Sci-Fi 4x strategy game that has you exploring every corner of the galaxy. On the face of it, the game’s premise is as simple as can be. You build up your empire, traverse into the Great Blue Yonder, explore deeper space, and interact with other intelligent species.

Of course, the devil lies in the details, which abound in Stellaris.

The graphics are fairly pleasant overall. The colors aren’t particularly distracting, and performance issues in-game are few and far between. There’s a lot of details to both the ships and the planets, all the way down to the mountain ridges on the myriad worlds you come across.

The visuals aren’t exactly spectacular, but they’re admirable nonetheless. Besides, you’ll commit most of your time to various screens, so you won’t even be looking at the graphics proper.

As far as the soundtrack is concerned, it performs quite well too. The track shows a lot of effort has gone into pinning down the atmosphere of a sprawling space-faring, epoch-spanning strategy game. They span from bombastic to pensive, suitable for all moments of your exploits. You’ll get a bit of a Star Trek vibe from time to time, to be sure.

You start out by selecting one of the dozens of races (humans included) with which to spread across the stars. This choice is far from simply aesthetic, mind you. Each faction comes with its own set of attitudes, physical attributes, and other personality traits.

Do you feel like bending the galaxy to its knees as a sector-enveloping dictatorship? Or perhaps you would rather show the universe some love as a peace-preaching trading collective? Maybe a Borg-ian robotic assimilation machine hellbent on total hegemony and homogeneity? These and anything between are possible. 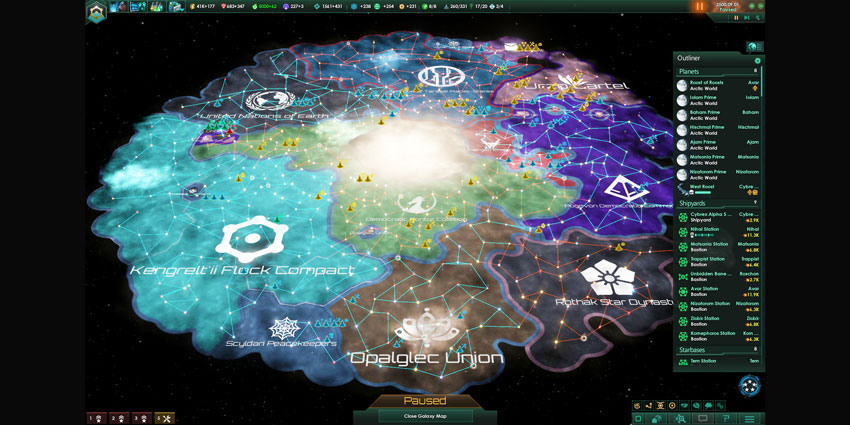 No matter what path you choose for yourself, you will find others crossing it. You may enter into alliances, wage wars, or entertain shaky periods of political peace, whatever suits your (con)quest. All the while, you create new technological/scientific breakthroughs, design and fly your custom-designed ships, manage your people how you see fit, and decide how to deal with assimilated populations and species. You personally appoint key figures in your empire, from generals to head researchers, and they all have their quirks and problems.

While it may sound like a handful, juggling all of this is relatively straightforward, even though it all occurs in real time. The interface is sleek and simplistic enough to get around without your brain overheating. All the important screens are accessible with but a click or two. Meanwhile, the bulk of the relevant information is presented to you directly.

Beyond the aforementioned, you also navigate a tech tree. But this isn’t a traditional, predetermined and visible tree.

Instead, you’re periodically given a choice between several research options, seemingly at random. This actually represents a breath of fresh air because it forces you to mold a strategy on the fly. You need to adapt as new tech tree options present themselves to you.

Flow of the Game

During a single session, your empire rises to the heavens, reaches out to other worlds, encounters other civilizations, allies with or wars against them, and if all goes well, occupies most of the galaxy (40 percent is a victory condition). With such varied gameplay, one expects a varying pace of gameplay.

The problem is that this change in flow isn’t exactly as smooth as shifting gears in a new, state-of-the-art car. It rather feels like you’ve lent control of the transmission to your absent-minded toddler while you text your friends about how “lmao” what you’re doing is.

The beginning-to-mid-game section truly shine. Discovering fascinating little stories (called anomalies) and making your first outward stretches into the broader galaxy feels remarkable. And guiding your science ship from location to location and learning about the map is awesome. But as your territory expands, the micromanagement levels ramp up, which may prove frustrating.

Inevitably, your session will devolve into a massive slog, not too dissimilar to what you would see in a Civ game.

Most players will find that the only true resolution to practically any game (in Stellaris) is through violent conquest. And when you do go on a warpath, it isn’t a smooth process. It’s more of a rollercoaster ride, with highs and lows strewn about the enterprise.

Worst yet, those that have been playing as a peaceful, understanding coalition are forced to backpedal on all their policies and crush every outsider quite intolerantly. It really feels like there should be a feasible channel through which such players can attain victory.

Finally, the Crisis scenarios aren’t quite polished. The idea is promising: throw a game-changer late-game that forces still-existing factions to break the status-quo in order to face the threat. It could be anything from a sudden clash of empires to a robot rising.

But it’s often difficult to gauge how much of a danger these are. That leaves many to simply endure it while trudging through whatever they were up to beforehand. Granted, these scenarios have gone through improvements in later patches, but they aren’t perfect.

To make matters more frustrating, loading screens tend to go on for too long. Some fixes have addressed this to a point, but not to where it’s easily tolerable.

This is a title by Paradox, a development studio notorious for its exhaustive (or exhausting, rather) post-release patches.

Crusader Kings II is a prominent example of this practice. The game has received so many facelifts and fixes that it even changed some core gameplay mechanics it had. It’s kind of looking at one point of a river. You can clearly tell what it is, but it technically isn’t made up of the exact same stuff it was earlier.

Stellaris is no exception to the Paradox treatment. So many patches keep rolling off the conveyor belt that one even wonders when this game will ever be completed and whether it had ever been “whole” in the first place. This is what makes writing a Stellaris review so tasking. Within just a few months, the bulk of this information may become irrelevant to the conversation about Stellaris.

That being said, there also exists a positive to this. It means that any faults you may find in the game may disappear later down the line. For example, many have complained about the somewhat shallow diplomacy system. While little has come to rectify it as of yet, Paradox may eventually treat us to a complete overhaul or a rebirth by a thousand patches.

We just dedicated a lot of time to besmirching the Stellaris name. But in actuality, the title is an amazing experience. The sheer scope of what you can do in the game and how you can approach it makes up for almost every one of its faults.

From the variety of starting empires to the bevy of inspired Anomaly events, it all points to Stellaris being a grand strategy game. It also manages to shake up the traditional 4x formula a little. Nevertheless, it still stands as a textbook example of a 4x space strategy. It also testifies to what the Paradox development studio can really do.